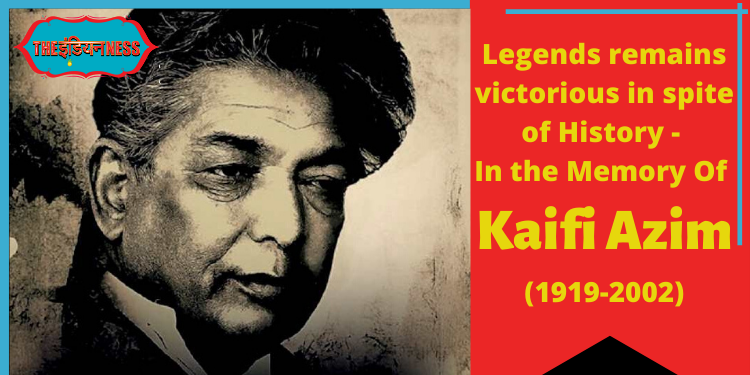 Today is the 101st birth anniversary of famous Indian poet, lyricist and activist Kaifi Azmi, and The Indianness is celebrating the 101st birth anniversary of the legend poet Kaifi Azmi, who was a man born with poetic blood and still being remembered as national pride. He has made a major contribution to society through his writings. The talent of Shero-Shayari of the famous poet and lyricist Kaifi Azmi of the Hindi film world started appearing from the days of his childhood.

Kaifi Azmi, who specializes in writing poems of love to Bollywood songs and screenplays, was one of the most famous poets of the 20th century. Born on 14 January 1919 in Mizwan village of Azamgarh district in Uttar Pradesh, Syed Athar Hussain Rizvi alias Kaifi Azmi wrote his first poem at the age of just 11 years.

It is seen from his writings that he was inspired by Mahatma Gandhi’s Quit India movement at that time in 1942 and later moved to Mumbai to write in Urdu newspaper.

Kaifi Azmi is also known for promoting Urdu literature. He is also been remembered as the one person who brought Urdu literature in the motion picture world, which by that time was a big step taken by him and still being counted as the honoured moment. As Pakeezha’s soundtrack goes on, famous compositions such as Koi Yeh Kaisei Kaane from the film Earth, Yeh Duniya Yeh Mahafil and her own poem Aurat are remembered as notable contributions to the Urdu language and the Hindi language.

Born on 14 January 1919 in Mizwan village of Azamgarh district in Uttar Pradesh, Syed Athar Hussain Rizvi alias Kaifi Azmi’s father was a zamindar. Father Hussain wanted to give him the highest training and for this purpose, he enrolled him in Sultan ul Madaris, the famous seminary in Lucknow. The poet inside Kaifi Azmi was alive since childhood. From the age of just 11, Kaifi Azmi started taking part in Mushayars where she also used to get a lot of herpes. He with the collaboration with Pirzada Qasim, Juan Eila and other members participated in the historic mushairas of the twentieth century.

Nida Fazli said, “Kaifi Azmi was not just a poet. He was also a good stage performer with Shire. The strength of this performance was his voice and voice fluctuations, as well as the masculine Kadokamat and film actresses. Shayari and performing it in an artistic way. These two characteristics are rarely found in a single poet. And when it is found, the poet starts touching the peak of popularity in his lifetime. Kaifi Azmi was a poet associated with this tradition, a tradition that he got from childhood in the Majlis of Moharram, in which Murciye (songs of mourning) was recited.

He was profound in the theatre that is a hearer he used to make the listeners laugh whenever they wanted, and they used to make them mourn whenever they would, with the movements of the eyes and hands. Kaifi Azmi’s reading style was unique among his contemporaries. I have also heard Suman and Bhawani Bhai of Hindi and Firaq and Josh in Urdu.

In the year 1942, Kaifi Azmi was sent to Lucknow and Allahabad for higher education in Urdu and Persian but Kaifi joined the Communist Party of India and started working as a party worker and then joined the Quit India Movement.

As far as it comes to his writings Kaifi Azmi has since been awarded several awards. He was also honoured with 3 Filmfare Awards and the prestigious Padma Shri Award for Literature and Education.

It is clearly seen that Kaifi Azmi is a poet of all time with ground root yet universal appeal. “He inspires the youth, provides food for thought to adults, speaks the language of justice and brotherhood, which are very important messages in these fractured times,” says Kaifi saab’s daughter and actor-activist Shabana Azmi.

As a tribute to Kaifi Azim Indian government also inaugurated a train which runs from his hometown Azamghar to Delhi named as “Kaifiyat Express”.

How Sanskrit evolved? the complete timeline