Sheela Sharma- artist who paint using her mouth and feet 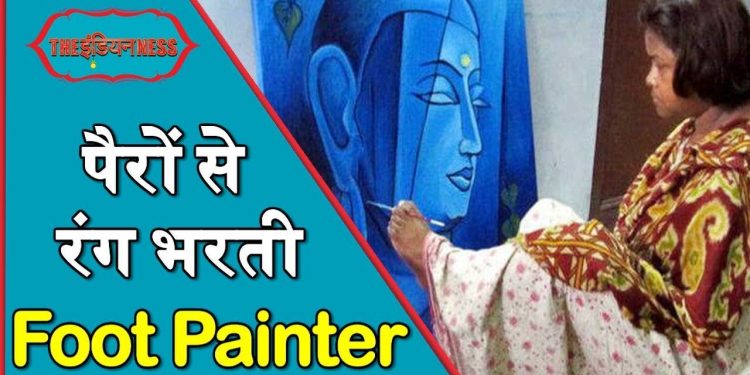 Sheela Sharma lost both her arms in a train accident at a tender age of four. Despite being handicapped for a lifetime, Sheela didn’t lose hope and conquered her weakness like a boss! A 51 year old women does painting by using her mouth and feet. Some of her recent works have been included in a group exhibition by artists with disabilities. She use to draw beautiful paintings and use to paint such complicated paintings that a normal person would too find tough to be done. Her process is labourious but she does everything including mixing the colours, cleaning the paintbrushes and moving canvasses all by herself.

At first his father opposed her to do painting and wanted her to pursue a safer job, but Sheela’s dedication never stopped her from doing what she loves to do. She was criticized by many people and was told that she can’t continue painting that way. But she went on to do her bachelor’s degree in fine arts from Lucknow University and made many friends through her paintings in school and college. Breaking all the odds, today Sheela is a talented painter.

“My father never really understood art and wanted me to take up a ‘safe’ job but I wanted this to be my life,”

“Whatever the current scenario is, it’s not a happy picture. Government should do something about it,”

Sharma has taught many children to paint and sketch and lightened many other lives along with her. She is a living example that conditions can be anything but the motivation and self -confidence you have on yourself can take you miles away. For people with physical disabilities, Sharma is an inspiration. Whatever cross our path, can sure become an obstacle but can ever become a burden to stop achieving what you aspires for.

“For me, brain is the most important part in the body and if that is fine and working then there is no stopping. Even if a person decides to beg that is totally his/her call but nobody is incapable of doing anything,”

She held an exhibition of her works in Mumbai at the Kala Ghoda Art Entrance where she showcased a series on Buddha and has also been exhibiting in Delhi, Bangalore and Lucknow.