Ashif Shaikh- could be a key to Eradicate Manual Scavenging 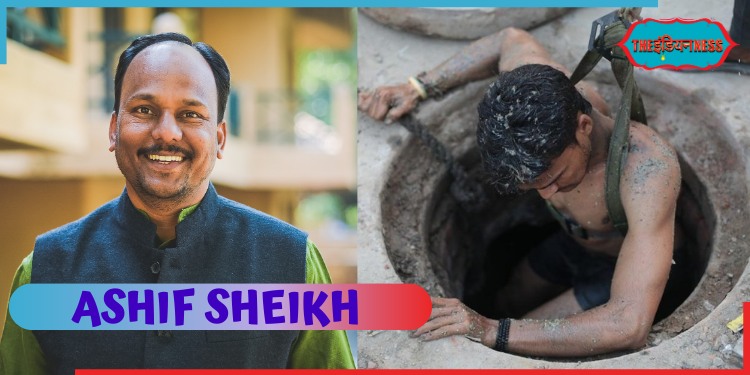 Manual scavenging in literal sense means cleaning human excreta or waste. Typically, in India there’s a specific community engaged in this work- the Dalit community, out of which 95% are women. These women face several challenges like discrimination, untouchability and also been subject to sexual harassments. Along with disposing human waste, these people are also expected to dispose animal carcasses which in turn invites bulk of diseases and skin disorders. In India on an average one death occurs every 5 days due to this practice. Though the government banned the practice back in 1990’s, it hasn’t been implemented as a whole. Many villages and big cities like Delhi, Mumbai and Chennai bear the burden of this ill practice. But just as this practice prevails, young people are coming forward to help eradicate the issue. One such man is Ashif Sheikh who till now has managed to give life to over 31 thousand manual scavengers.

Ashif Sheikh, a graduate in political science, was born in Dewas, Madhya Pradesh. Throughout his life he witnessed discrimination and harassment towards the people of Dalit people, because he too belongs to the same community. He saw women dying out of diseases and children dropping out of school just because they practice manual scavenging. Only 5% of Dalit children go to school till 5th standard. It’s a shame on our country that even having acts like Article 14, 15, 16, 17 and 18 in Constitution of India, that prohibits any discrimination on the grounds of race, religion or ethnicity, we still hasn’t overcome this taboo. This scenario led Ashif form a student membership union “Sahasi Ekta Group” in 1999 along with his friends, addressing the same issue. He got scholarship in Youth for Voluntary Action, a Mumbai based organization where he educated Dalit youth on the basic Human Rights. In 2000, he formed a human rights organization “Jan Sahas” to empower Dalit women and to protect their rights. Over the years, Jan Sahas has proved to be one of the leading organization working over the issue of manual scavenging. The campaign was launched in almost 120 districts of India and has helped 29,000 women to come out of manual scavenging.

“I founded Jan Sahas to eliminate forced labour and all kinds of discrimination and violence based on caste, class and gender. A group of like-minded people decided to raise their voice after the death of three Dalit children and bonded labourers in an illegal fireworks unit in Ujjain in Madhya Pradesh.” Said Ashif in a report by Indian Express.

They have also filed a PIL in the court for abolition and rehabilitation for the people engaged in manual scavenging. The Yojna is also working for the girls subjected to sexual harassment. Later the Rashtriya Garima Yojana was started where they ensured the rights, equality and dignity for the people belonging to the Dalit community. He walked Maila Mukti Yatara from Bhopal to New Delhi covering almost 200 districts in 18 states of the country.

Manual scavenging was banned 25 years ago with the passing of the Employment of Manual Scavengers and Construction of Dry Latrines (Prohibition) Act, 1993, but it continues to find practitioners. It is one of the more dreaded issue of the country whose roots are dug deep in our culture and day to day practice. In India discrimination is not a practice anymore it’s a culture, though many people says they do not practice discrimination many still agrees. Do you know that discrimination kills almost 230,000 girls before the age of five in India? And just in a bid to eliminate manual scavenging and discrimination from the nation, Ashif Sheikh’s ‘Jan Sahas’ can be an answer.

Tunday Kabab and the story behind its ...