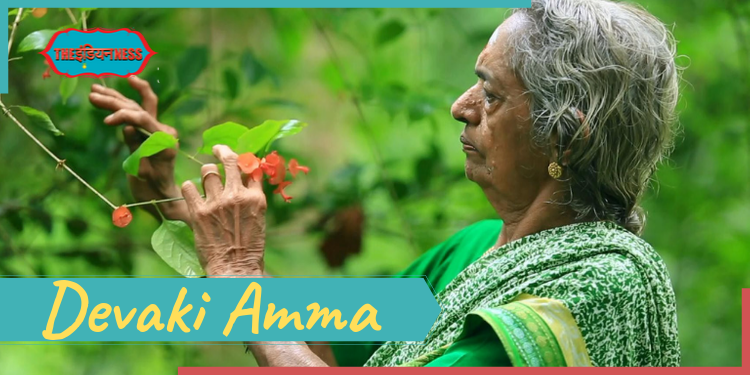 Today we live life full of dust, smoke and toxic air, and, interestingly we all keep on living this lifestyle without changing a bit. The rise in air and water pollution keeps on degrading the environment and inviting the worst environmental hazards. But today, we are proud to share you the story of Devaki Amma, an 85 years or above old women, who single handedly planted an entire forest! At the age when most of us are on bed or walking with stick in our hands, she is nurturing thousands of trees altogether. At a time when forests are fast disappearing, Devaki Amma’s forest has around 3,000 trees, including over 1,000 trees of common, rare, endangered and biologically important species that support a wide variety of organisms.

Devaki Amma joined her mother-in-law to cultivate paddy post marriage and continued until 1980. All of this begin following a road accident when Amma was bed ridden for three consecutive years. She says that she used to enjoy doing paddy cultivation but due to her injuries she was unable to do that. But with the help and support from family members she planted several saplings never knowing that it would turn into an entire forest of around 5 acre of area. Her husband used to bring a rare seed every time he goes to a trip and just like that it all started. Her children and relatives also use to help her either morally or by bringing her rare seeds and saplings. Today, her 40 years have paid off as many species such as Krishnanal, musk trees, star trees, and mahogany, among others, grow in the sandy soil in natural environment. It is home for a wide range of rare species. She uses organic manure and compost to grow trees and due to this, today, more than 1000 of them bear fruits, vegetables and flowers. She also has an oddly beautiful practice of speaking to the trees, she surprisingly everyday spend at least 10 minutes talking to the trees and plants she has grown.

“For generations, my family and in-laws have been working in the agricultural industry. While the men are involved in corporate jobs, women of the house have predominantly handled the paddy cultivation.” Says Amma in a report by The Better India.

When botanist and forest enthusiasts visit her forest they are shocked less and mesmerized more. A botanist said that the forest is so deep and dense that when it would rain, the droplets doesn’t reach the ground directly! Unable to sustain the forest on her own because of her age, Devaki Amma has resorted to hiring people. She lives in a spacious house surrounded by ponds, trees and farm animals such as cows, buffalos, and oxen which is nothing less than a fairytale.

In 2002 she was recognized for her efforts by the Ministry of Environment and Forest with the Indira Gandhi Vrikshamithra award. Later, she also received the Nari Shakti Puruskar from Indian president Ram Nath Kovind. Devaki Amma is also the Head of Environment Department at Thiruvananthapuram Engineering College.

Many people brag about how good of an environmental activists they are and how they are awaring people about the growing danger, but in themselves they haven’t done anything to really brag about. But when we hear stories about such people who have come out of their comfort zones to actually do something instead of just bragging inspires us in most unusual ways. We wish her luck for her journey miles ahead!