Four Unique Indians You Must Know About

The current population of India is 1,367,538,140 which is equivalent to 17.74% of the total world population. Yet each person is different and this difference is well seen throughout the nation. Among them, these four distinctive individuals are extremely quirky : 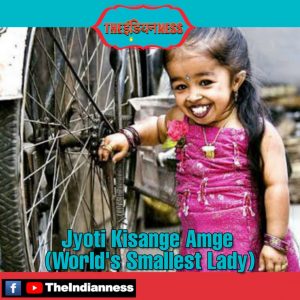 Jyoti Kisange Amge is an Indian woman notable for being the world’s smallest living woman according to Guinness World Records. She has a height of 62.8 centimetres. This dwarf-ness is a result of a disease known as achondroplasia. Jyoti was born on 16 December 1993, and following her 18th birthday she was mentioned in Guinness book. She gained a lot of popularity and was featured in the 2009 documentary entitled Body Shock: Two Foot Tall Teen. She was also a guest participant on Bigg Boss 6. On 13 August 2014, she was cast in the fourth season of American Horror Story: Freak Show as Ma Petite. Despite being a victim of dwarf-ness she emerged out to be one of the finest actress one can see. Her passion led her path towards international cinema as well.

Shakuntala Devi was an Indian writer and mental calculator, popularly known as the “human computer”. In 1982 her name was featured in Guinness book. What was really amazing about the young girl’s mathematical prowess was that she did not receive any formal education owing to her family’s financial situation, yet emerged to be one of the most brilliant mathematical minds of her time. Once Arthur Jensen, a professor of psychology at the University of California, took test of her abilities and wrote a book on her named ‘intelligence’. She calculated 7,686,369,774,870 × 2,465,099,745,779 in just a span of 28 seconds! In 1969 she was awarded the title of the ‘Most Distinguished Woman of the Year’ by the University of Philippines. She died at the age of 83 in 2013.

A normal human has 32 teeth’s but will you believe if someone tell you that they can even have 37 teeth’s? The most teeth in the mouth is 37, achieved by Vijay Kumar V.A, and was verified in Bangalore, India on 20 September 2014. He was mentioned in Guinness World Records.

In a time when families are getting smaller, Ziona Chana has 39 wives, nearly a ton of children, 14 daughters-in-law, and 33 grandkids. He has one big family of 181 members who lives in a mansion of 100 rooms. He lives in Mizoram. His wife, Huntharnghanki claims that the reason that the family gets along so well is because it is based on mutual love and respect. For his another wife, Rinkmini, Ziona is the center of their universe and the most handsome man in the village. The oldest wife of Ziona has the responsibility of distributing household chores. All the 39 wives live happily together, without ever complaining of any differences between them. They all share a strong bond and their love for Chana is never-ending.

Now this is exactly what India is all about- extraordinarily fascinating things and a mind blowing economy!

Does A Large Chunk Of The Fashion ...