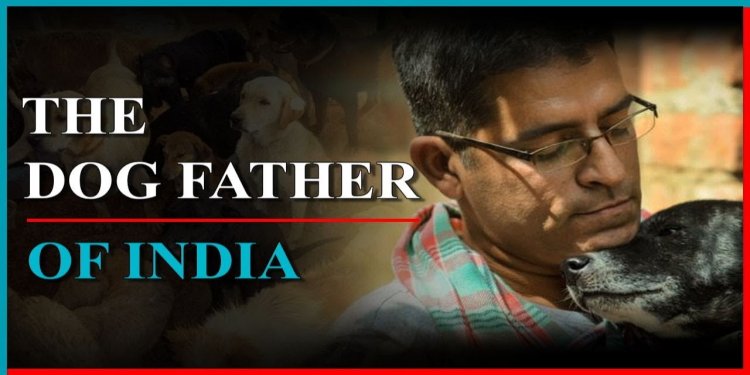 There is no shortage of animal lovers in the world. A stray dog or cat aren’t stray anymore, they have people around them showering love but what sets apart Rakesh Shukla is that his love for dogs today has given shelter to almost 8000 of them! Yes, a 45 years old talented electronic engineer today is the Dog father of India who rescued, fed and given shelter to more than 8,000 dogs. Shukla who’s working as a CEO of The Writer’s Block, writes and speaks on leadership, business and technology. He is also a Ted X speaker and inspires people to get over failure. Shukla is the single largest dog rescuer in the world.

His story started back when he first rescued a puppy from a street. He named him as Lucky. This incident didn’t only helped the baby dog but also opened Shukla’s eyes to inconvenience of dog welfare in the country. He then decided to rescue the needy dogs and within the span of two years he rescued about 250 stray dogs. In 2012, his life took another turn when he chanced upon Cookie (named by him) a St Bernard who was paralyzed thrown in the bushes. She was first seen by a woman who took her to various vet hospitals but no one was ready to take her. Finally Bengaluru’s oldest dog shelter took the dog in, but declared that she could not recover, so she would be euthanized. They then called Shukla who readily accepted to keep her. Her took Cookie with him but realized that there was no proper medical faculty for needy dogs. As Cookie was paralyzed, Shukla made her a cart with wheels, which become a tool for her to move around. But this incident led him to the foundation of VOSD which means Voice of Stray Dogs. The staff consist of 3 members and one van. Since then it is growing and growing. VOSD became the world’s largest no-kill dog sanctuary and a rescue center. Apart from rescuing close to 8,000 dogs, VOSD has provided over 250,000 free treatments to dogs and currently has 800 resident rescued dogs at its premises. The dogs roam freely in the premises with no chains attached to them. There is no shortage of money, space or treatment for any dog. The van now not only runs in Bengaluru but also in Pune, Mumbai, Delhi, Chandigarh, Chennai, Thiruvananthapuram, Indore, Coimbatore, Kolkata, Kochi and other cities. They also provide shelter to the retired dogs from the police and army. The VOSD has 24*7 service with vets treating the dogs any time needed. All the dogs get regular medical check-ups, weekly tick and flea treatments, de-worming, annual vaccinations and a needed nutrition. VOSD, on average, spends 2k per dog every month which includes the cost of nutrition and treatment, which is not a big amount. They also have special units of surgeries and anesthetic supplies.

In total Rakesh opened a space purely dedicated to dogs, maybe that’s why he was able to get the title of Dog Father of India. Rakesh who had complete successful life finally found his solace in his dogs. Today alongside his software company, he and his wife acts as parent for all those dogs who once even struggled to live their life. Today Rakesh holds a three-and-a-half acre sanctuary on the outskirts of Bengaluru, where one can find hundreds of dogs who initially belonged to no one today has their own home.