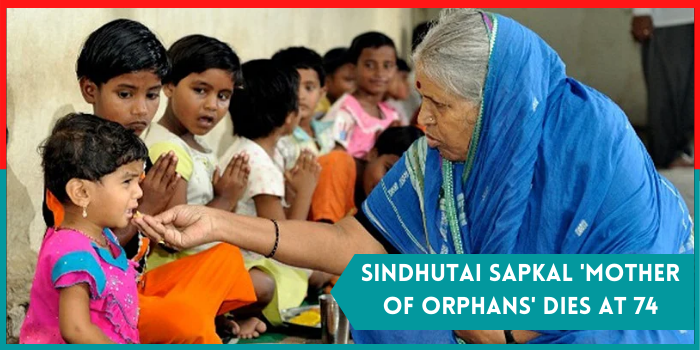 Sindhutai Sapkal also known as ‘Anathanchi Maye’ or ‘Mother of orphans’ dies at the age of 74 following a heart attack at a private hospital on Tuesday. She was a Padma Shri awardee known for her charitable works and adoption of several orphans, abandoned or destitute kids, and providing rehabilitation for women.

She had undergone surgery back on 24 November last year for a large diaphragmatic hernia. After the surgery, she recovered well, however later developed a lung infection. Her body was kept for final respects at Manjiri ashram and the funeral ceremony was held today. Several citizens along with the President of India, Ram Nath Kovind, and Prime Minister Narendra Modi paid condolence on Twitter.

Who was Sindhutai Sapkal?

Being an unwanted child she was named “Chindi” which means a torn piece of cloth. Sapkal was born in the Wardha district of Maharashtra on November 14, 1948. Her father wanted to educate her against the extremely strong opposition of her mother which ultimately ended her education when she passed the fourth standard. Bearing circumstances of family poverty she was married at a very tender age of 10 to a 30-year-old man. After marriage, she moved to the Navargaon forest area of Wardha.

During her pregnancy, a neighbor fueled rumors against her and thus she was later abandoned by her own husband being nine months old pregnant. Sapkal was boycotted by the whole community and everyone slammed the door at her. She gave birth to a baby girl in a small cowshed outside her home and walked with her newborn child for hours in to her natal home but was too rejected by her mother.

She use to sing and beg at railway stations, streets, and other places to feed herself and her daughter. During this time she met several other orphan children who were either abandoned by their parents or didn’t had one. Sindhutai Sapkal herself decided to adopt each one of them and begged for hours to feed them. In order to avoid the feeling of bias she willingly donated her biological daughter to the trust in Pune. Many a time she had to fight for the next meal due to lack of funds. But Sindhutai never stopped. To date, she had adopted and nurtured over 1200 orphaned children. They fondly call her ‘Maai’. Her orphanage was known as Sanmati Bal Niketan Sanstha.

Many of her adopted children are now lawyers, engineers, and doctors. Now her biological daughter and the adopted children are running orphanages of their own. Years later her husband returned to her apologetically. Being a kind woman she forgave him and adopted him as one of her children, as she was only left with motherly love. She used to introduce her 80-year-old husband as one of her eldest children. Sindhutai Sapkal had received around 270 awards from various national and international organizations.

A Marathi film “Mee Sindhutai Sapkal” was made as her biopic back in 2010. She had founded numerous organizations across Maharashtra that provides education and shelter to thousands of orphans. She was proud of having a grand family of 207 sons-in-law, thirty-six daughters-in-law, and over a thousand grandchildren.

“She was admitted to the hospital for more than a month and died due to heart attack at the hospital today at 8.10 pm,” said Dr Shailesh Puntambekar, Medical Director, Galaxy Hospital on Tuesday.

Sapkal was a woman of thousand personalities, however, the one emotion she mastered was Kindness. Her untimely demise has left thousands of people saddened and shocked. Despite suffering tragic difficulties in her own life, Sapkal dedicated her entire life to serving orphans and abandoned kids. She was a true epitome of love, compassion, and resilience.

Why women should rethink their inheritance?

Bulli Bai case- What is the complete ...