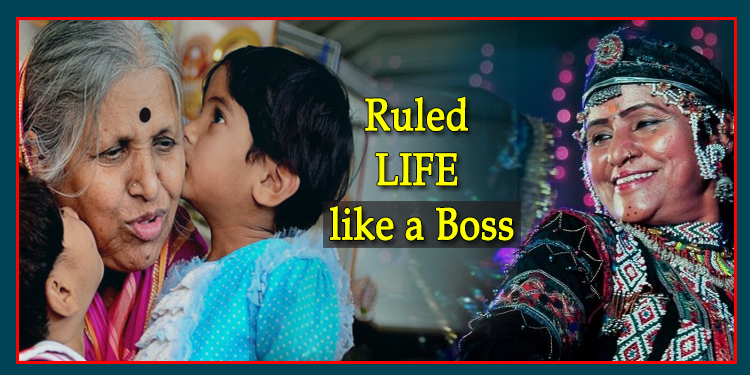 India is an incredible country, but despite of its amazing diversity India experience harsh discrimination as well. Indian women are suppressed since ages but much attention draws when women emerged out like a queen from the worst. Sindhutai and Gulabo Sapera are two of those who despite having worst of worst didn’t lose hope and emerged out to be a legend.

Sindhutai Sapkal– the mother of thousands of Orphans:

Being an unwanted child she was named as “Chindi” which means a tore piece of cloth. Her father wanted to educate her against very strong opposition of her mother which ultimately puts an end to her education when she passed fourth standard. Bearing circumstances of family poverty she was married at a very tender age of 10 with a 30 year old man. She was later abandoned by her own husband being nine months old pregnant and gave birth to a baby girl in a small cowshed outside the home. She walked with her newborn child for hours in such a harsh condition to her initial home and was too rejected by her mother.

She use to sing and beg at railway stations, streets and other places to feed herself and her daughter. During this time she met several other orphan children who were either abandoned by the parents or don’t have any. Sindhutai Sapkal herself decided to adopt each one of them and begged for hours to feed them. in order to avoid the feeling of bias she willingly donated her biological daughter to the trust in Pune. Many a time she even had to fight for the next meal due to lack of funds. But Sindhutai never stopped. Till date, she has adopted and nurtured over 1200 orphaned children. They fondly call her ‘Maai’. Many of her adopted children are now lawyers, engineers and doctors. Now her biological daughter and the adopted children are running orphanages of their own. Years later her husband returned to her apologetically. Being a kind women she forgave him and adopted him as one of her child, as she is only left with motherly love now. She introduces her 80 year old husband as one of her eldest child. Sindhutai Sapkal has received around 270 awards from various national and international organizations. A Marathi film “Mee Sindhutai Sapkal” was made as her biopic in 2010. She has founded numerous organizations across Maharashtra which provide education and shelter to thousands of orphans. She proudly says that today she has a grand family of 207 sons-in-law, thirty-six daughters-in-law, and over a thousand grandchildren.

Gulabo’s life started not so differently as any other girl child. She was buried alive after mere an hour of her birth. Buried for consecutively seven hours, the child was still alive and rescued by her aunt. She was seventh child of her parents. Her father was strictly against murder of girl child thus took her away with him. He used to feed her with the leftover milk offered to snakes. At first she was named as Dhanvanti because she was born on Dhanterus, after being heavily ill, she was declared dead by the doctors but when she survived at the Dargah Sharif in Ajmer because of the rose placed on her chest, her father named her as Gulabo Sapera. She then learned how to dance and began dancing on streets. Initially she was opposed by the community but was only allowed to dance as she brings money and food. In 1981, Rajasthan Tourism Department official Tripti Pandey, sister of singer Ila Arun, spotted Gulabo dancing in Pushkar when she was 7 years old.

“She came to me and said you are dancing like you don’t have bones in your body. Later she convinced my father to let me perform for their show the same evening,” Gulabo recalls.

Gulabo was not born to die a terrible death but to rule the world with her dance and song. She is the maker of Rajasthan’s celebrated folk dance form Kalbelia. She has danced in several countries like US, Germany, France, Brazil and England. She has received Padma Shri award in 2016 along with gold medal from Queen Elizabeth in 1985. She now has her own dancing academy Gulabo Sapera Dance Academy, where she teaches the Sapera-Kalbelia dance.

What Is Jugaad Technology?