Women who marked the revolution

Women are creating their own relay in almost every field in India, whether it be politics, entertainment or even encountering space, they never disappointed us. Since ages growing up from discrimination was a tough task yet some women showed us the true spirit of self-worth. Be it beauty bout or space advancement, women are leading! The status of women in India has been subject to many great changes over the past few millennia and it is growing somehow.

These few Indian women challenged the old residing stereotype and created their own race.

Kalpana Chawla was the first Indian woman who reached the space. She first flew on Space Shuttle Columbia in 1997 as a mission specialist and primary robotic arm operator, but sadly couldn’t return back. With her two missions in space that are STS-87 and STS-107, Kalpana had logged a total of 30 days, 14 hours, and 54 minutes in space. She serves a role model for many space freaks in the world. Chawla was awarded the Congressional Space Medal of Honor, and several streets, universities and institutions have been named in her honor. Chawla’s death was shock for the nation but that didn’t stopped the brave astronaut to become the national hero of the country!

Reita was the first Asian female to win the Miss World beauty pageant in 1966. She is also the first Miss World winner to qualify as a Doctor. Born in 1943, she was a meritorious student but has an interest in modelling. During the Miss World 1966 contest, she won the sub-titles ‘Best in Swimsuit’ and ‘Best in Evening wear’ for wearing a saree. After winning the pageant she was offered with several roles in Bollywood but Reita declined it all and focused on her medical studies. She married her mentor endocrinologist David Powell in 1971 and has two children.

Durgabai Kamat, a Marathi actress was India’s first women to act in movies. In early 1900’s when acting was a taboo for women, this women stood against all odds. Her first movie was Mohini Bhasmasur in which she acted along with her daughter Kamlabai Gokhale. Both mother and daughter created history. Since then many other females started working in movies and today we can see great actresses of all time such as Madhubala, Aishwarya Rai, Hema Malini and many more. Durgabai changed the stereotype and encouraged women to come out of the shelf. 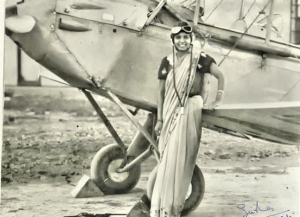 Sarla Thakral was first Indian women pilot to fly an aircraft. She earned an aviation pilot license in 1936 at the age of 21 and the same year flew a Gypsy Moth solo. She became the first woman in India to get her “A” license, when she accumulated more than 1,000 hours of flying. After that she continued her service as commercial pilot for some time but later during World War 2 has to unwillingly drop her plans. She earned a diploma in fine arts from Mayo School of Arts and later became a successful businesswomen and a painter.

She is considered as first female director of Indian cinema. She also worked as an actress and screenwriter. She launched her own production house, Fatma Films later known as Victoria-Fatima films, and directed Bulbul-e-Paristan in 1926. She made her debut as an actress in Ardeshir Irani’s silent film, Veer Abhimanyu in 1922. She directed many other films, her last being the Goddess of Luck in 1929. Along her many films, ‘Heer Ranjha’ released in 1928 became a great hit! Her legacy was continued even after her death by her two daughters Zubeida and Sultana as they too were actors in silent films.

She is the first woman to join the Indian Police Service (IPS). She remained in service for 35 years before taking voluntary retirement in 2007. In her teenage years, Bedi became the national junior tennis champion in 1966. Between 1965 and 1978, she won several titles at national and state-level championships. Bedi was also a part of Indian tennis team that beat Sri Lanka to win the Lionel Fonseka Memorial Trophy in Colombo. Today she is an active politician and social activist. She was also the part of famous anti-corruption movement in 2010 along with Anna Hazare.

Sushmita Sen was the first Indian female to win Miss Universe crown. She won the pageant in 1994 at the very young age of 18. Later she acted in several Bollywood movies and is known as an actress who is bold and beautiful. She has won several awards including a Filmfare Award. At the Indian Leadership Conclave 2016, she was awarded with the “Eternal Beauty & Actress of the Decade'” award for her contribution in the field of Arts. With her tremendous role in social work she has also received Mother Teresa award. Sen adopted two daughters and is a proud single mother. She is a glamorous actress who stay committed to her job no matter what.

These few women actually set the trend in their era. They broke all the stereotypes and rise like no one else. What they changed is nothing but just the status of women in the country. If they hadn’t done what they did, many fields would still have been a void for Indian women.

Four Indian women who made it to ...