Few Indian movies that inspires us to think differently! 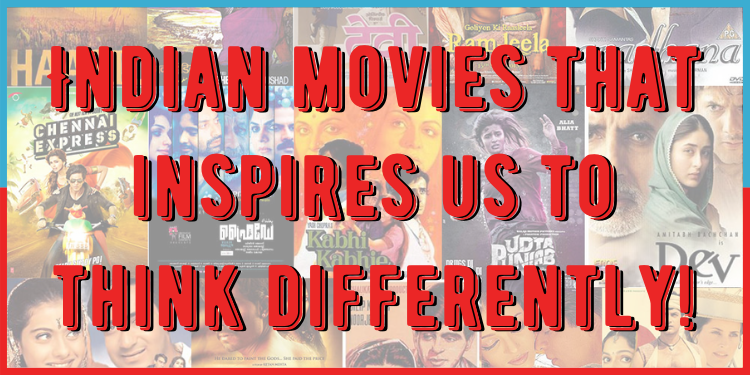 Just like Indian culture, Indian movies too are full of motivation and inspiration. They are full of ideas that can help one think about life differently. Bollywood is not just about flowers, romantic songs, slow-motion action, and loads of melodrama or the Manish Malhotra’s magical wardrobe. It is all about stories that need voices to be heard and recognized. And just like that comes the greatest names such as Aishwarya Rai or Amitabh Bacchan. It gave us the all-time favorite Jodi’s; Shahrukh and Kajol or Hema and Dharmendra. A DJ without Badshah’s songs or a wedding night without YJHD songs is as incomplete as Hindi movies without an item song. But what Bollywood actually is in its own definition?

Here are a few Bollywood movies that will inspire you to think about life differently!

Lakshya is a movie that is way ahead of its time. Hrithik Roshan’s as Karan Shergill had given a tremendous performance and Farhan Akhtar’s incredible direction had added up to the story of the movie! It is one of the most engaging Bollywood movies of the 2000s. The journey of Karan Shergil, from a directionless youngster to a patriotic Indian Army official is one that touches our hearts each time we set to watch the film. Despite its revered posthumous cult-following and critical admiration, Lakshya seems without flaws. The movie portrays two very different stories pre and post-interval. It is a classic Indian movie that you should definitely watch!

Comedy in its genre, Dil Chahta Hai takes us to a mesmerizing journey of friends and aspirations. It is the best youth movie of all time! An age comedy-drama revolves around three friends who get separated after college and get engaged in their own lives. But soon they are reunited and this time their life goes through major transformations where they get a chance to learn about love and life. They get to know that life needs fun but also seriousness when it requires, It tells us why friends and family are an important part of life! The Bollywood movie shows countless emotions and every time you watch the film it will give you a brand new feeling of contentment.  It is indeed one of the best youth movies of all time!

Back in 2003, a roadside goon alongside his Circuit was projected over the silver screen which left the audience with nothing but just awe. The Bollywood Khalnayak of Indian movies transformed into a doctor who doesn’t treat his patients with medicines or surgeries instead of love and care. The movie also depicts the rat race inside the Indian education system, where everything is planned and the students have to abide by them, no matter what! The Munnabhai tells us about the life, love, and dreams of our parents. Nevertheless, the movie is a worth watch and if you are looking forward to it, don’t miss out on its sequel- Munna Bhai MBBS.

If you haven’t watched Swades yet, you are missing a masterpiece by none other than Sharukh Khan. In the movie, King Khan is portraying the role of a young scientist Mohan. The direction, cinematography, dialogues, and music of the film are incredible but it is the script of the movie that stands out the most. The film talks about many social issues prevailing in our society such as casteism, education, women empowerment, poverty, child labor, old age homes, and inequality. Written, directed and produced by Ashutosh Gowariker, Swades is an all-time inspirational movie that will give you the chilling insights of Indian society!

A Wednesday is a totally realistic movie that revolves around terrorism. A Wednesday is an intelligent harangue against terrorism, an invigorating package, a racy thriller, and an incredible movie! In fact, the teen hacker who claims to be a college drop-out by choice and ends up helping the technologically challenged cops to capture the suicide bombers! A Wednesday is definitely a must-watch movie and without sharing any further details of the movie- we suggest you watch Bollywood masterpiece now. Yes! It is that good!

Manjhi: The mountain man is based on the real-life story of Dashrath Manjhi, a man who broke down an entire mountain to form a road connecting the village. After his wife passes away trying to cross a mountain, Manjhi out of extreme rage decides to carve out a road to a mammoth peak! The movie also stands out because of the amazing performance of the star Nawazuddin Siddiqui. He donates his 22 years of life to hammers and chisel making it easier for the villagers to travel from village to the nearby town! Manjhi: The mountain man is a definite watch.

The epic love tale of Salim and ...