Skin colours- how much do us really know about them? 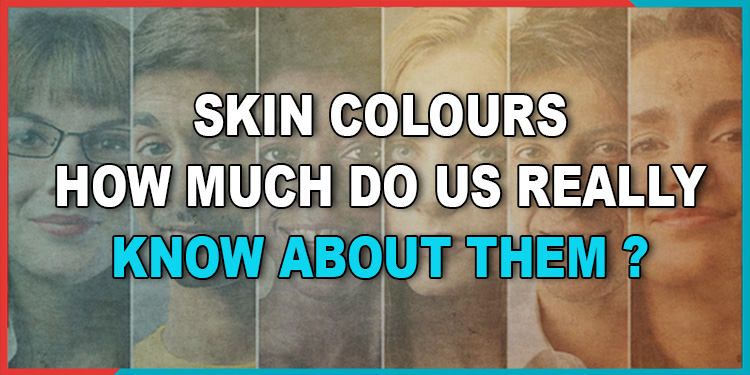 Race is a term which needs no introduction especially in a country like India. India is full of diversity so does exist different people of different colours. We have the widest range of skin colours in the world. But how much do we really know about them? In India people only know about two colours- ‘gora’ and ‘kaala’, or well known as ‘fair’ and ‘dusky’ as many commercial companies name it as. But is it really that small? Do you only see fair and dusky- and nothing beyond that? If yes, what do you tag it as? If you are confused then let me tell you that the people who fall out of this kaala and gora spectrum, we tag them as Africans, Nigerians, black and what not! And the harsh reality is that we name them as Africans and Nigerians without having a complete knowledge of that particular skin colour as well. So then racism begins – blacks against whites, whites against blacks, against Asians for being high achievers, Mexicans against Colombians, Venezuelans against Peruvians, Bosnians against Croatians, North Irish against Irish, all Irish against English, all of the tribal wars between groups in countries in Africa, the black apartheid in South Africa’s past which is now evolving into white genocide today – it just never ends. It is a never ending phenomenon because it is deeply associated with our culture, mainly we don’t have a 0.1% of knowledge of different skin tones. Colourism is prejudice involving the preferential treatment of people with light skin within and between ethnic groups.

We have several skin tones- light or pale white are the people extremely whitish in colour. Then we have fair or whitish which means such people have comparatively fair skin tone. Medium, white to light brown is the category where the skin tone is moderate neither light nor dark. Olive to moderate brown colours can be understood as dusky colours whereas brown to dark brown have chocolaty shades. Very dark brown to black has a black or near to black skin colours as seen among Africans. But here in India we only rely on two shades and other are just left seeking dust. Fair people in India are considered pretty or beautiful and simultaneously enjoy more benefits over others whereas dusky people are pre-assumed as someone not beautiful and good enough. We somehow has those roots where beauty is defined by the tone of our skin. Indians somehow believe that our skin tones define our worth, which is much visible through commercials, movies, billboards or TV programs that says that “fair is beautiful’. And my question is not why fair is beautiful but why dark is not beautiful? Why darker people experience groundless humiliation? This type or problem is more common among women than men. Women are always rushing to look fairer by applying cosmetics, bleaching, home-made shit and possibly everything that they are aware of. Approximately 10% of the variance in skin color occurs within regions, and approximately 90% occurs between regions because skin color has been under strong selective pressure of proximity, climate and genetic variations. And it’s a harsh reality that we judge people on their looks rather than their action. It’s just like if you have been taught that all whites have attitude and all black are criminals than you don’t even think of anything else and just copy paste the same label. And unfortunately we judge often seemingly most of the time wrong.

Why is there discrimination on skin colours?

Do you know that most of the skin colour variation was due to a variation in a skin pigmentation gene called SLC24A5, now tell yourself- was it in your hands? It’s not something in your hand, it’s not you who decide to be fair or dark- it’s our biology. The sad reality of this overall scenario is that if given a chance, 99.9% of us would choose to be fair and not dark. We are just like that, our minds have been programmed in a way that we see and judge people on their appearances. Its time stop such differences and create a better nation where your skin tone doesn’t define your social status. India is country with more than 20 religions and a wide range or proximity, so having people with variety of skin tones is natural. And judging them only by their appearance seems as foolish as one could ever be. There’s a great saying that “don’t judge a book by its cover”, it applies on us as well. If you actually goes through the history of Indian or Human skin tones – you’ll get to know that human ancestral skin colour was actually dark and not white. White skin are result of biological mutation and nothing more than that. So the skin prejudice which says that white are superior in true sense defy the basic logic. A better education about such sensitive topics should be given since childhood. Children are not supposed to be taught that they shouldn’t be racist but mostly why they shouldn’t be racist. A background history of such topics should be taught and then leave them decide on their own- what side they choose to be on.

Plastic for food- food for plastic