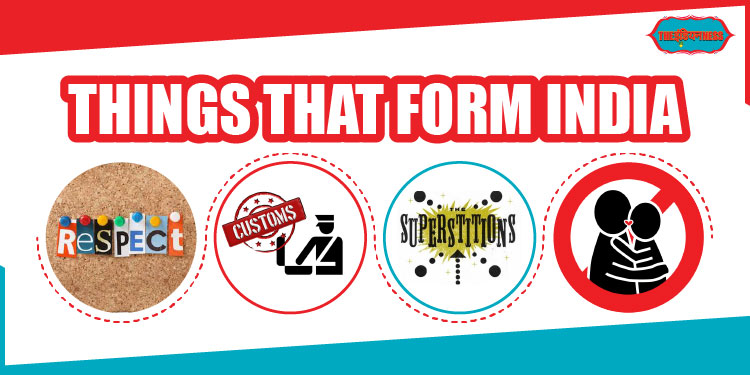 India is incredible and being an Indian means more than just being incredible. Indians can pull any task at any time- they don’t seek permissions. Do you know we guys can DIY possibly everything in the world! – “We make it work somehow”. You want to know how children are controlled- who can better teach you than Indian mothers, for them their kids are their frustration relaxing toys. Then there are Indian Dads, who can actually count the number of protons floating inside a tube light which is lighted unnecessarily. Your sister is your quirkiest creature yet a savior at the time of need. And when we talk about Indian aunties- they are better than CCTV. Any gossip of any place- your one stop dictionary- the aunty next door.

But what actually makes INDIA ?

We have loads of Gods!

Yes! That’s exactly true. In India we don’t have one god but a variety of them. And here it is not just about Islam or Hinduism- each religion encompass several different gods. There are more than 10 Hindu Deities in India. From Lord Brahma, Vishnu, Shiva, Ganesha, Hanuman, Krishna to Kali and Parwati. If see in Vedic literature, Devas and Devis represent the forces of nature and some represent moral values such as the Adityas, Varuna, and Mitra, each symbolizing the epitome of a specialized knowledge, creative energy, exalted and magical powers. The Epics and medieval era texts, particularly the Puranas, developed extensive and richly varying mythologies associated with Hindu deities, including their genealogies. From devoted Shiva Bhakts to oh my friend Ganesha- INDIA is indeed a country of many.

India is food capital of the world. Indian cuisine consists of a wide variety of regional and traditional cuisines native to the Indian subcontinent. It’s not just about continental to traditional- India has a variety of street delicacies. The taste changes from street to street and to house to house. While visiting different cities you’ll see a whole new variety of food. Each state, each city has their own signature food. Like the vadapav you’ll get in Mumbai, can’t be seen anywhere else in the country. Similarly the taste of south Indian dosa’ is prone to plagiarism. While many has lost in history, many others are discovered each day. From low budget street foods to extremely elegant and classy revolving restaurants- India has it all. Another thing about Indian food is that- the taste you will experience here, can’t be find anywhere else.

India is the most diverse country in the world. We have more than 5 different religions and a variety of cultures. And mind it, India is not plain as any other country- each state is unique in its own. Do you know that there are more than 800 dialects in India! Every state is just like a whole new country. The tradition of south India can’t be matched with north India. While one religion encourages non vegetarian foods the other will restrict them. While one have mad pre wedding rituals of marrying a tree the other might not. We have different ideals and that’s what makes it so cool about being an Indian.

The modern world likes to take credit from the ancient innovation. Ancient Indian literature has been influenced by many renowned scholars. They were the kings, the saints and sages, mathematicians and people with the knowledge of art and literature. From Aryabhata to Kalidasa. We have such great scholars. Kalidasa wrote famous plays. Aryabhata proved heliocentrism. Brahmagupta calculated zero. While other gave us great poetries and novels. But all these were taken into credit by Europeans and we don’t know about the great Indian scholars that found them first. Even the oldest form of medicine- Ayurveda was also an Indian innovation.

Medical facilities in India is incredible. There are 1.4 million doctors in India and why not? We have some of the best medical colleges in the world. The Indian Constitution makes the provision of healthcare in India the responsibility of the state governments, rather than the central federal government which makes it easier for the public to access it. We have public healthcare as well as private healthcare- each providing their best treatments. People from several other countries also make visit to India for their various medical treatments. The government of India has launched several healthcare schemes in the country like Ayushman Bharat, which focus on providing quality healthcare to all.

The Indian Armed Forces are the military forces of the Republic of India. It consists of three professional uniformed services: the Indian Army, Indian Navy, and Indian Air Force. The Indian armed force has more than 75,000 personnel. They have 159 qualified trades that come with tremendous technical prowess, ranging from computer hackers to civil engineers, supply chain & logistics to satellite communication. From vocational training and trade to management training, the Army gives skills and knowledge to fulfill every job needed. Maybe that’s why the great adventurer like Bear Grylls always wanted to join Indian army. Do you know that Indian Army is third best army in the world!

These are just the few, actually the list is never ending. Take for driving in India– I can bet if you can drive in India, you can drive anywhere else in the world. The traffic you will face here will make you frustration prone. Whereas the random street cattle’s wandering here and there will definitely make you an expert in zig zag driving! And then how to manage getting out from the narrow lanes is a talent which only an Indian holds. And now if this doesn’t make you proud, don’t know what else can.

Women who marked the revolution