Why we need altruism to tackle pollution menace? 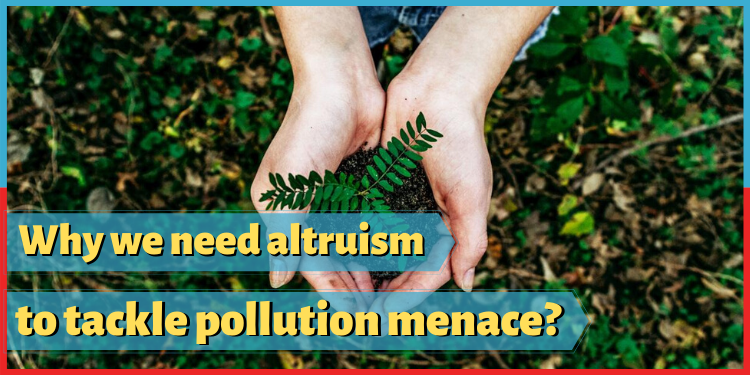 The World Health Organization says 12.6 million people died due to environmental causes in 2012 and all the natural resources are increasingly compromised! Pollution doesn’t only threaten the environment but the human existence as well. Pollution, a major environmental issue is the introduction of contaminants into the natural environment and cause adverse changes. These pollutants penetrates deep in our lungs and paves way for variety of diseases causing fatal results. Interestingly, pollution isn’t a natural phenomenon instead a result of careless human activities, an outcome of our own actions!

Our health is greatly influenced by the air we breathe. The pollutants mixed with it penetrates into our lungs and then spreads throughout the whole body. WHO estimates that around 7 million people die every year from exposure to pollutants that lead to diseases such as stroke, heart disease, lung cancer, chronic obstructive pulmonary diseases and respiratory infections, including pneumonia. The ones that impact our health in a long run involves loss of lung capacity, decreased lung function, diseases such as asthma, bronchitis, emphysema, or possibly cancer and shortening of life.

Water pollution and air pollution together contaminates sea water and as a result ocean acidification has increased to the maximum! Do you know that 25% of carbon dioxide in air is absorbed by the oceans which is decreasing the carbonate ions in the water? Additionally, it reduces the basicity of water and increases the acidic pH. Carbonate ions are building blocks of marine life. It helps species like corals, crabs etc in making shells which is direct marine feed. But decrease in it has put a question mark on marine future. Ocean acidity is increasing on 10% higher rate than the past 55 million years!

On the other hand almost 14% deaths worldwide was caused by air pollution in 2012. This rate is more than malaria and HIV/AIDS combined. Increase release of greenhouse gases such as CO2 has caused hole in ozone layer as well. Also, it has increased the risk of lungs and heart prone diseases amongst people- which is directly infecting the country’s GDP. Then we have enormous amount of plastic production. Plastic is non recyclable and once manufactured it takes years to degrade. And do you know that there actually are 8 plastic gyre in 5 major oceans in the world, which is again an ultimatum on marine life? This all together sums up into a future with no trees, no water, no oxygen and no life!

Why we need effective altruism?

Building altruism- means how can we use emerging technologies for the benefit of others? Altruism has three aspects, why, how and what. First is why, which means do as much good as you can. Second is, how- how do you decide which part to focus on? And third is what- what is the need of effective altruism? Altruism isn’t a stream of study, nor do you need a degree to practice it. It is just personal will that promotes altruism towards working for issues in a selfless manner. Altruism is nothing but just something you feel like doing.

If you want to see altruism in action, take a look at these three individuals- Anand Malligavad, Sagar Singh or Malhar Kalambe, who selflessly are indulging their time cleaning and saving the environment. Anand Malligavad had till now revived almost 30% of Bengaluru’s dried lakes whereas Sagar Singh on the other hand is fighting to save Aarey Forest of Mumbai. 22 years old Malhar Kalambe too is doing his bit cleaning beaches of Mumbai! All these individual are doing this without anyone asking them to do so. This is their selfless act towards saving the motherland and being thankful to it.

Altruistic helpful behaviors involves acting out of concern for other’s benefit. Investing in altruism can mean several things. Encouraging more people to work on the problems that currently seem most urgent like pollution, communicating the fundamental ideas of altruism, so that more people are inspired and able to seek out the highest-impact chances! However when talking about altruism one cannot ignore the possibilities of failure as well. Many attempts to do good- fail. Working out how to help solving what seems to be impossible is difficult, and many attempts to make a difference can’t be proven a success. To build an effective altruism three factors are important. The amount of the resources like funds, man power one can offer; the proportion of those resources that they devote to helping and how efficiently those resources devoted to help are actually being used. It is important to recognize the need of altruism in today’s society where people are becoming more and more self-centered it seems tough to look out for those who work for others. Empathy not only for humans but also for other resources is equally important. Our world will be much sadder place without altruism!

Anecdote behind Khadi – Signature Fabric of ...