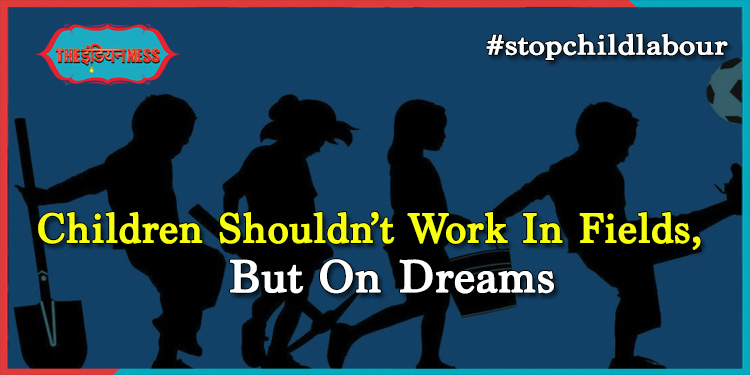 World Day Against Child Labour : Child labour includes exploitation of children through different ways. It involves exploitation of the children and, to force them for work. Victims of child labour usually suffers from depression and anxiety, pushing them to destructive habits like smoking, alcoholism and drug abuse.

In recent census it was found that across India, 3.9% approx 1.5 crore children under the age of 14 were engaged in the practices of child labour. This is not only the problem in India ,whole world is facing this curse of child labour like Pakistan, Nepal, china, Egypt, Australia and many more. On the mass level approximately 152 million children are working in unconditional forms of labour which includes bonded labour, prostitution, pornography, drug trafficking and other activities.

In against child labour, the INTERNATIONAL LABOUR ORGANISATION (ILO) launched the world day against the child labour in 2002 to focus on the global extent of child labour and the action and efforts needed to eliminate it. Each year on 12th June, the world day brings together government, employs, and workers of the organization, civil society, as well as million of the people from around the world to highlight the plight of child labourers and what can be done to help them.

The 2019 theme of ‘world day against child labour’ is “CHILDREN SHOULDN’T WORK IN FIELDS, BUT ON DREAMS”, yet today, 152 million children are still in the field of child labour that occurs in every sector, seven out of every ten in the agriculture. Anti-child labour organization has decided to look forward towards UN sustainable development goal target 8.7 set by the international community calling for an end to child labour in all its forms by 2025. They are also encouraging ratification of the protocol of 2014 to the forced labour convention, which protects both adults and the children.

Child labour to every extent is a heinous crime which needs to be solved quickly. Children of tender age groups are seen working on tea stalls, selling goods on red lights or working on other local shops. Although, child labour is ban in India, still a major population of underage are working under extreme conditions. The need for money force them to work in factories and mines which are extremely harmful for their health at this growing age. The anti-child Labour Day doesn’t work on its own, we need to do something about it. We need to start creating awareness campaigns about the ill effects of child labour. Start penalizing the people who are indulged in activities like child labour and as a responsible citizen start taking stand against this social evil.  This anti-child labour day, let’s take a pledge that we will educate the young ones not manipulate them, we will help them not exploit them and we will make sure that the young generation forms a better future, who are ultimately the leaders of this country.

SAFE BLOOD FOR ALL